SyncSpace, a whiteboard app for iPads and Android Tablets could turn out to be the next best innovation in educational technology after the techbook.
According to www.free4teachers.com, the app can be used to create drawings and documents on the Tablet and has the advantage of freehand drawing tools, typing tools or a combination of both.
“Your drawings and documents can be sent and synced with other users so that they can comment and edit your drawings and documents,” says www.free4teachers.com.
Application for education
“SyncSpace could be a great app for collaborative brainstorming sessions across multiple devices”.
By Patrick Wameyo Otundo 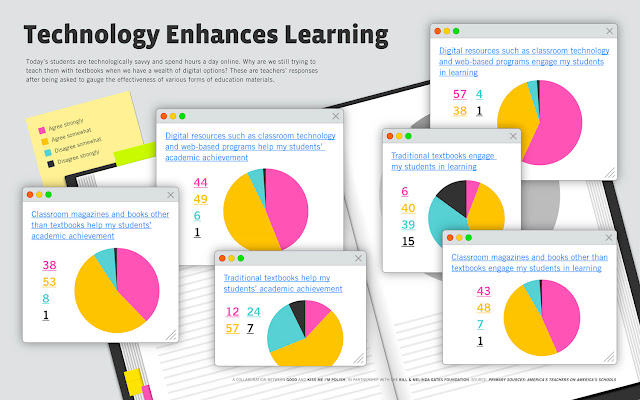 In a poll carried out by the Bill and Melinda Gates Foundation teachers were asked on whether they think technology has helped enhance learning in their classrooms and almost all of them seemed to agree that the adoption of technology in classroom instruction was untenable.
Out of the statements posed to the teachers, 57 percent strongly agreed that “Digital sources such as classroom technology and web-based programs” engaged their students in learning.
Forty four percent of teachers polled strongly agreed that digital resources helped their “students’ academic achievement.
But that does not mean that hard copy material are no longer useful as 43 percent of the teachers said that magazines and books engaged their students in learning.
Responding to a closely similar statement posed thus: “classroom magazines and books other that textbooks help my students’ academic achievement,” 38 percent of those polled strongly agreed.
On whether traditional textbooks help the students in learning, only six percent strongly agreed with the statement, with only 12 percent saying that the textbook helped enhance learners’ academic achievement.

Across the world, emerging trends are posing a challenge to Kenyan educators to adopt new technologies in teaching and learning. In the USA, grade K-12, the equivalent of form one, there have been identified six emerging technologies which promise to revolutionize education.
According to the 2011 Horizon report, the new technologies include, cloud computing, the use of mobile technology, gaming, the provision of open content, the use of learning analytics and the adoption of personal learning environments.
Cloud computing, which is the use of internet-based tools which enable teachers and students to to collaborate online is a cost-saving intervention that has been adopted by may schools across the USA.
According to www.peterpappas.com, schools in the US state of Michigan “are already using Google Apps for email and document collaboration.”
Mobile devices such as tablets and smartphones are also increasingly in use in most schools as they are less expensive than most laptops and need less infrastructure to support them.
In a report appearing on www.peterpappas.com 5th to 12th graders are already “using iPhones for gathering and and tracking GPS-tagged bird sitting for Wild-lab, a scientific research program.”
Gaming has also been identified as an area that is having impact on education as “it allows for experimentation, the exploration of identities and even failure.”
An example is given of Palm-Beach High School which is said to be using a web-based game show format in their language arts program.
The broad availability of open content where schools develop and share content id another of the trends that is revolutionizing the way we access classroom content.
This model is already being experimented in Kenya through www.elimuportal.net where teachers from various schools come up with content and post it for free access on the web.
Learning analytics contains strategies aimed at students studying early math concepts such as fractions to learn via alternative methods that involved manipulation and visual approaches.
The adoption of personalized learning environments in which an individual student designs a system that best works for them is also widely being adopted.
Although the Kenyan experience is still a whole world away from what we have in the USA, it is expected that, with the wide adoption of technology-based learning, these new and emerging technologies will eventually be present with us.
By Patrick Wameyo Otundo 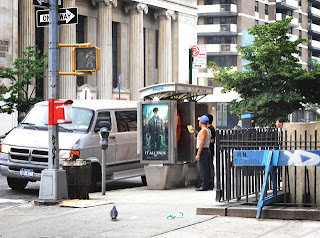 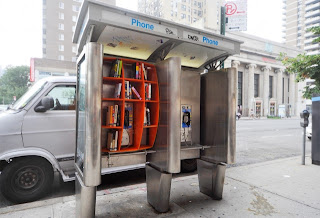 As Kenyans grapple what to do with the outdated telephone booths, it seems New Yorkers are thinking ahead. John Locke an architect in the city has found a new way to use the old metallic booths that have been overtaken by new technology including mobile telephony. He is converting phone booths in the City into pop-up libraries complete with custom bookshelves and small selections of books. He spoke on the project in this interview with The Atlantic Cities

Study: More Education May Not Lead to Support For Affirmative Action – Inside School Research – Education Week

By Patrick Wameyo Otundo
Like many other countries, the Kenyan education system is largely based on learning materials presented in the for of a text book. This is set to change if the Ministry of Education implements ICT in all public schools in the country.
But as the government struggles to spread the use of technology in education, elsewhere, huge strides have been made with the gradual replacement of the traditional textbook with what is now being referred to as a ‘techbook’ becoming a reality.
According to www.techlearning.com, the Discovery in Education Science Techbook in more than a digital book.
“It is a different way of thinking. Thinking outside the box, perhaps. Or more appropriately thinking outside the book,” says a report on www.techlearning.com.
This mode of learning, which is being used across the USA includes a model lesson for teachers to use with every concept, assessment questions for each standard, a teacher’s guide and a DVD for use when the internet is not available.
It is expected that the Kenyan ICT for schools program will eventually meet the standards that have been set elsewhere in the world.
So far, secondary schools that have embraced ICT have only been provided with a DVD containing learning and teaching content for form one, which is the first grade. Material for senior classes are still at the development stage with teachers from different schools expected to contribute content to the national education portal www.elimuportal.net.
The American techbook has integrated features such as “virtual labs, reading passages, video segments, science sleuths, explorations and interactive glossary.” It provides teachers with an easier and creative way to build lessons using technology resources and content.
The lesson resource for teachers is presented in PDF format with links to connect to different resources.
By Patrick Wameyo Otundo
South Korean electronics company Samsung is set to launch it’s own education service known as “learning hub” in what is being seen as following a trend that has already been set by Apples iTunes U and iBooks platforms which are thought to have enhanced the push to have iPads in schools.
“Learning hub” is set to provide 6,000 textbooks and videos from 30 education providers across the world.
According to thenextweb.com “the Korean mobile giant intends to introduce a range of interactive features that assist learning on its Galaxy tab 10.1 and Galaxy tab 8.9 tablets.”
The features of the learning hub will include automatic scoring, note taking abilities and learning management options “providing a true self-guided learning environment.”
The new educational service – which Samsung intends to launch at upcoming Mobile World Congress expo in Barcelona, Spain in just a week – will be open to people of all ages from primary school students to adults of all ages.
So far all that is known about the service is from a series of screen shots on its official Flickr account.
It remains to be seen if Samsung will face off the stiff competition it is already facing from Apple which announced in January that downloads from its iTunes U and iBook Author platforms had reached 3 million and 600,000 respectively, in five days of the launch.
The new iTunes U app gives users to iTunes U content in one place without having to surf through iTunes to find it.
The new app featuring interactive content allows teachers to post messages to the ‘class’ and get feedback as well as deliver assignments.
So far there have been 700 million downloads of iTunes app content and thousands of universities including the Open University are already using it.
Teachers can also set office hour right from the app.
Samsung is looking to expand its own “learning hub” onto smart phones, training companies and private operators so that they can deliver the content to assist with self-learning in work-based training to their employees and customers.
Details on the workings of the new platform are expected to emerge after the MWC expo.

“Although, the main ingredient of chalk dust is non-toxic, chalk dust can accumulate in the human respiratory system creating long-term health problems where there is chalk dust overexposure. Inhaling chalk dust for a number of years could create or trigger respiratory problems,” Says Riziki Makokha writing for The East African Education Insight, an E-zine.